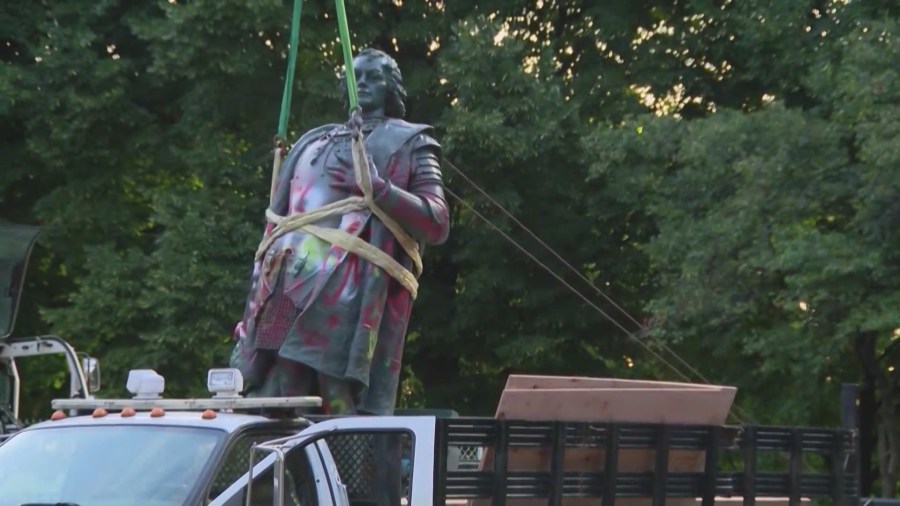 CHICAGO — It’s unclear if the two Columbus statues that were removed will ever return following a new report from a city committee.

The Chicago Monuments Project, which was tasked with identifying if 41 monuments and statues across the city “capture current values,” released its 73-page report on Friday. In it, committee members suggest continued removal of the Columbus statues, which were previously in Grant Park and Arrigo Park.

In 2020, the statues were removed after violent protests in wake of George Floyd’s murder.

38th Ward Ald. Nick Sposato said he is not surprised of the report.

“We had a committee of 30 people, 27 lefties, three righties. No surprise to me they were going to tear everything down,” he said.

While many in the Italian-American community regard Columbus as a cultural icon, the Chicago Monuments Project proposed taking the monuments down because the explorer “has become a bitter reminder of centuries of exploitation, conquest and genocide.”

“I think it makes sense not to put them back in our parks,” he said. “Not that they can’t exist somewhere — perhaps there’s museums that make sense.”

“I thank the members of the committee for their time, and commitment to this important work on behalf of our City, the extensive and creative public engagement and their willingness to engage in this work in a thorough and thoughtful way. While the scope of this work impacts us all, I want to particularly highlight and thank members of the Italian American and the Native communities for their engagement and participation in this process. I have personally learned a lot from my engagement with members of both communities.“

The future of the statues remains unclear as the report cites that “there is much work still to come before any of these recommendations will be finalized or implemented.”