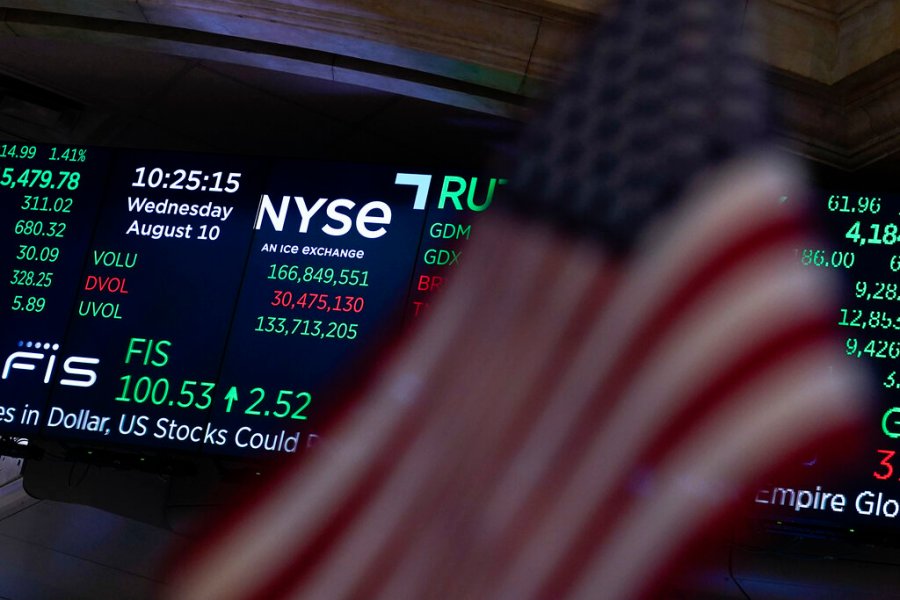 NEW YORK (AP) — Stocks are ending sharply lower after the head of the Federal Reserve dashed Wall Street’s hopes that it may soon ease up on rate hikes in its effort to tame inflation. The S&P 500 lost 3.4% Friday, its biggest drop in two months, after Jerome Powell said the Fed will likely need to keep interest rates high enough to slow the economy for some time in order to beat back the high inflation sweeping the country. Tech stocks led the way lower, pulling the Nasdaq composite down even more. Higher rates help corral inflation, but they also hurt asset prices.

THIS IS A BREAKING NEWS UPDATE. AP’s earlier story follows below.

NEW YORK (AP) — Stocks are falling sharply Friday after the head of the Federal Reserve dashed Wall Street’s hopes that it may soon let off the brakes for the economy.

The S&P 500 was 3.1% lower, on track for its biggest drop in two months, after Jerome Powell said the Fed will likely need to keep interest rates high enough to slow the economy “for some time” in order to beat back the high inflation sweeping the country. Shorter-term Treasury yields climbed as traders built up bets for the Fed to stay aggressive with rates.

The Dow Jones Industrial Average was down 954 points, or 2.9%, at 32,338, as of 3:45 p.m. Eastern time, and the Nasdaq composite was 3.8% lower. Investors initially struggled to make out the meaning of Powell’s highly anticipated speech. Stocks fell at first, then erased nearly all their losses, and then turned decisively lower with all but six of the companies in the S&P 500 in the red.

“He focused more on the Fed’s goals rather than the path,” said Jeffrey Kleintop, chief global investment strategist at Charles Schwab. “That left the market with less to grab onto in terms of the future path for policy.”

Powell’s speech followed up on several other Fed officials, who have recently pushed back on speculation the Fed may ease up on its interest-rate hikes. The increases help corral inflation, but they also hurt the economy and investment prices.

Powell acknowledged the increases will hurt U.S. households and businesses, in perhaps an unspoken nod to the potential for a recession. But he also said the pain would be far greater if inflation were allowed to fester and that “we must keep at it until the job is done.”

He was speaking at an annual economic symposium in Jackson Hole, Wyoming, which has been the setting for market-moving Fed speeches in the past.

“He basically said there will be pain and that they won’t stop and can’t stop hiking until inflation moves a lot lower,” said Brian Jacobsen, senior investment strategist at Allspring Global Investments. “It was a mercifully short speech and to the point. Powell didn’t really break new ground, which is good since Jackson Hole isn’t a policy meeting.”

Expectations had built through the week that Powell would try to to bat down recent talk about a “pivot” by the Fed. Such speculation had helped stocks surge through the summer. Some investors were even saying the Fed could cut interest rates later in 2023, as pressures on the economy mount and the nation’s high inflation hopefully recedes.

Perhaps giving some hope to investors, some analysts said Powell seemed to indicate expectations for future inflation aren’t taking off. If that were to happen, it could cause a self-perpetuating cycle that worsens inflation.

A report on Friday said U.S. consumers are expecting 2.9% annual inflation over the long run, which is at the lower end of the 2.9% to 3.1% range seen in the University of Michigan’s survey over the last year.

For now, the debate on Wall Street is whether the Fed will raise short-term rates by either half a percentage point next month, double the usual margin, or by three-quarters of a point. The Fed’s last two hikes have been by 0.75 points, and a slight majority of bets on Wall Street are favoring a third such increase in September, according to CME Group.

A report Friday morning showed that the Fed’s preferred gauge of inflation decelerated last month and wasn’t as bad as many economists expected. It’s a potentially encouraging signal, which may embolden more of Wall Street to say that the worst of inflation has already passed or will soon.

Following the reports and Powell’s comments, the two-year Treasury yield rose to 3.38% from 3.37% late Thursday. It tends to track expectations for Fed action.

The 10-year Treasury yield, which follows expectations for longer-term economic growth and inflation, rose to 3.04% from 3.03% late Thursday.

The Fed has already hiked its key overnight interest rate four times this year in hopes of slowing the worst inflation in decades. The hikes have already hurt the housing industry, where more expensive mortgage rates have slowed activity. But the job market has remained strong, helping to prop up the economy.

Investors got a fresh set of warnings from companies about the persistent impact from inflation and a slowing economy. Computer maker Dell slumped 12.7% after it said weaker demand will hurt revenue. Chipmaker Marvell Technology fell 7.8% after giving investors a disappointing earnings forecast.

Highest-rated barbecue restaurants in Chicago according to Tripadvisor