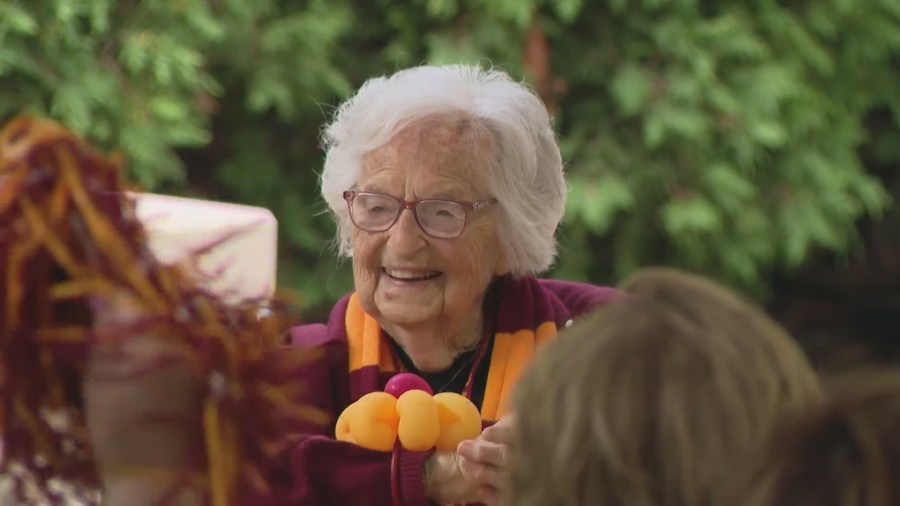 CHICAGO — Loyola University’s beloved Sister Jean Delores Schmidt celebrated her 103rd birthday on Sunday. The university made sure to pull out all the stops as Sister Jean received a big birthday surprise at the Loyola CTA Red Line train station.

In her signature maroon and gold, as well as her enduring smile, Mundelein College alum Christine Rydel was one of many on hand to celebrate the household name.

“I’ve never seen her not smiling and there’s a radiance,” she said. “So, she could almost just wear the purple because the gold shines out from her.”

During the Rambler’s historic 2018 March Madness run, the rest of the world got to know Sister Jean, but she has been an integral part of the men’s basketball team since 1994, serving as chaplain.

“[She] keeps her player’s focus, not just on the game, but on their studies and character development,” Lightfoot said.

Sister Jean’s gift this year was having the plaza outside the Loyola CTA Red Line stop renamed after her.

“From now on, every visitor and every current and former Loyola University student who hops on or off the CTA will see your name shining down on them,” Pritzker said. “A reminder of how much you mean to everyone.”

“For once, Loyola is honoring a Mundelein teacher, professor and everything that Mundelein was and it’s great to have you coming in and seeing a woman,” Rydel said.

For a woman who has dedicated her life to faith, education and basketball, Sister Jean says her birthday wish this year is to continue “working with students and seeing their dreams fulfilled.”