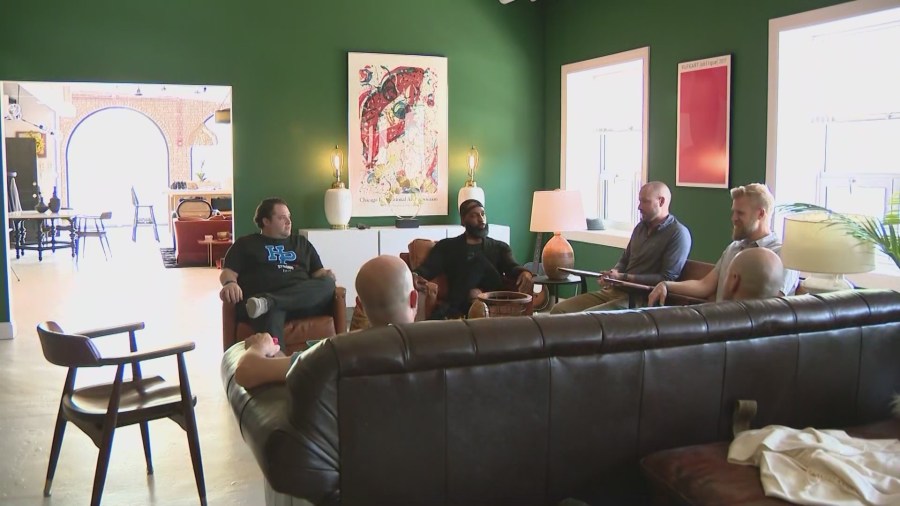 CHICAGO — It’s been 17 days since Highland Park was ripped open by bullets the morning of July Fourth.

In the hours after that horrific day, a group of local fathers got together to just vent. James Levin had the idea of just getting together in a casual setting to vocalize some internal strife.

“I was in a state of emotional distress we are just experienced a tragedy of a lifetime,” he said.  “(I thought) Let’s get together. Let’s put together a Facebook group quickly and put together an event and see if anybody will come.”

It was time to dismiss the antiquated, long held definition of a man as the stoic, strong and silent type and replace it with a modern-day approach.

Levin enlisted the help of his boyhood buddy Chris Falcon, who shares a design workspace in downtown Highland Park with his wife. It has been the group’s setting now for going on four sessions.

“This group has surprised me in so many ways,” Falcon said. “I haven’t had that many examples of what it is to be a vulnerable man, to be open, to share your feelings. And I came into this just totally green and watching these other men — and that’s the power of sharing and growing in a collective group.”

The father of two boys, Falcon said he has found these therapy moments, held in the form of just casual conversations, to be helping him and his boys.

“My sons (are) asking me, ‘What’s going on with that Dad? What are you doing? Why are you doing it?’” he said. “I’ve cried with them. I’ve shared with them and now I need to show them how men can take action.”

Some in the group said many were convinced by their wives to attend the sessions to begin the process of working things out. Not only have they embraced this method of opening up but hope they can be a new sort of prism of what a modern, strong man can be and how to lift the fog of loss of life and a community’s innocence.