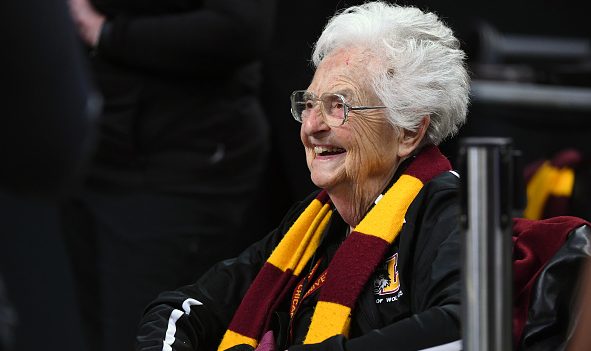 LAKE FOREST – She’s one of the most popular members of the Loyola University Chicago campus and has gained national notoriety over the past few years thanks to the success of the Ramblers’ men’s basketball program.

So there will be plenty of celebrations for her birthday on Sunday as she turns 103 years old.

In anticipation of this, a new tribute to the Loyola team chaplain was unveiled by the National Bobblehead Hall of Fame and Museum.

They released a pair of figurines in tribute to Sister Jean on Friday morning, one being an ornament and the other is a dashboard mini-bobblehead. They are licensed by Loyola University and in conjunction with the school’s athletic department.

This is the third bobblehead that’s been produced by the Bobblehead Hall of Fame, with the first coming out in 2018 after Loyola’s run to the Final Four and the second in 2021.

Presale for this bobblehead began on Friday and it’s expected to ship in October, with the proceeds going to the Loyola Athletic Fund and the Sisters of Charity of the Blessed Virgin Mary.

Arriving at Loyola University in 1991, Sister Jean Dolores Schmidt became the men’s basketball team chaplain in 1994 and has remained in that position ever since. While known around the Rogers Park campus and Chicago, Sister Jean earned national notoriety when Loyola made a surprise run to the Final Four as the 11th seed in 2018.

She was also featured heavily when the Ramblers made the Sweet 16 in 2021 and then when they made the NCAA Tournament again in 2022.

You can find out more information on the bobblehead from the National Bobblehead Hall of Fame by clicking here.

McDonald’s testing Chicken Big Mac: What we know so far