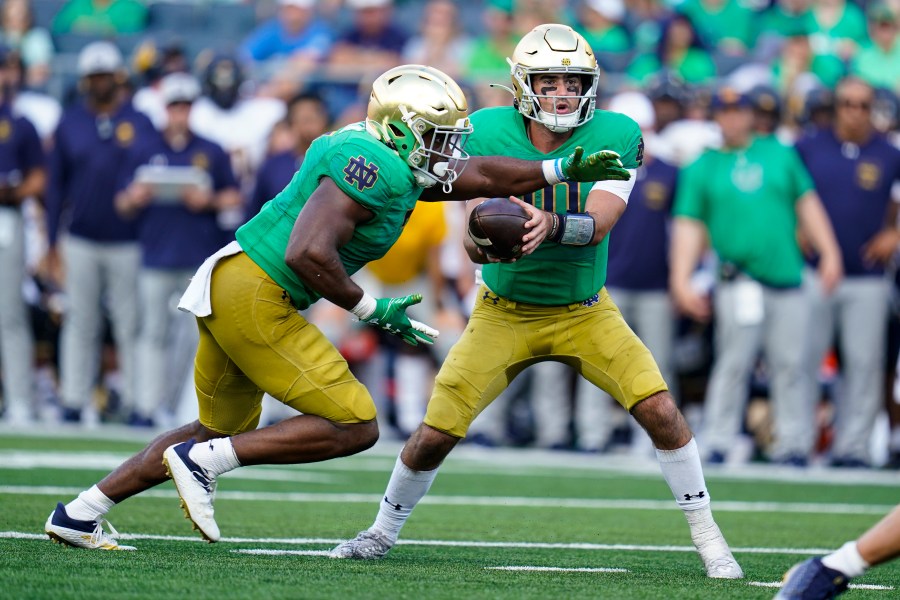 The Irish (1-2) outscored Cal (2-1) 10-0 in the fourth quarter to avoid becoming just the third Notre Dame squad to start a season 0-3. The Irish (1-2), who started the season ranked No. 5, had blown leads three times, made sure there was no second-half letdown this time.

But it wasn’t over until the last play. On fourth-and-13 from the Notre Dame 35, Cal’s Jack Plummer threw the ball into the end zone. The ball bounced off several players and Bears receiver Jeremiah Hunter nearly pulled it in, but the ball landed on the grass.

The Irish opened a 24-17 lead with 9:16 remaining on a 6-yard pass from Pyne to Michael Mayer, just Mayer’s second catch of the day. The touchdown was set up when Pyne threw a short pass to tailback Audric Esitime, and he sprinted for a 36-yard gain before tripping at the 6-yard line.

The Bears drove to the Notre Dame 22 midway through the fourth quarter but couldn’t get any closer. Plummer threw three straight incompletions, then was sacked by Isaiah Foskey for a 10-yard loss with 6:30 left.

Cal got the ball again on their own 7-yard line, but on third-and-10 Jack Plummer was sacked for a 5-yard loss. It looked as though Notre Dame had put the game away when cornerback Clarence Lewis picked off a pass from Plummer, but the Bears got one more chance when J.D. Bertrant was called for targeting.

Pyne, playing because Tyler Buchner sustained a season-ending shoulder injury last week, was 17-of-23 passing. Chris Tyree rushed for 64 yards on 17 carries and had five catches for 44 yards.

Pyne struggled some early on. His first pass to Tyree was short, and he overthrew several receivers and had receivers drop some passes. A snap struck Pyne in the facemask, but he recovered and handed off to Estime for a 7-yard gain. On another play, he was signaling for a back to move when the ball was snapped.

The Irish were aided by a Cal mistake. On third-and-4 from the 28, Pyne’s pass to Lorenzo Style was incomplete. But Cal linebacker Blake Antzoulatos hit Pyne high after the pass and was ejected for targeting. The Irish ran the ball four straight times and Estime scored on a 1-yard run to take a 14-10 lead.

The Bears drove 75 yards on 10 plays, but the final yard was the hardest to get. After DeCarlos Brooks and Jadynb Ott were stopped for no gain on back-to-back runs, Plummer scored on a quarterback keeper up the middle. The drive was aided by an unnecessary roughness penalty on Irish safety D.J. Brown for pushing Ott after the whistle.

Cal: Plummer, a transfer from Purdue who lost his starter’s job with the Boilermakers last season following a 27-13 loss to Notre Dame, showed the Bears he can make big plays, but not quite enough for the upset.

Notre Dame: The Irish need to cutdown on mistakes if they’re going to be competitive. Receiver Braden Lenzy had a false start on third-and-1, leading to Pyne being sacked on the next play. Right tackle Blake Fisher also was called for a false start on third-and-3. Late in the second quarter, when the Irish drove into Cal territory, linemen Jarrett Patterson and Zeke Correll were called for false starts on back-to-back plays to stall out the drive.

Cal: The Bears open the Pac-12 season on Saturday at home against Arizona.

Notre Dame: The Irish play at North Carolina on Saturday.