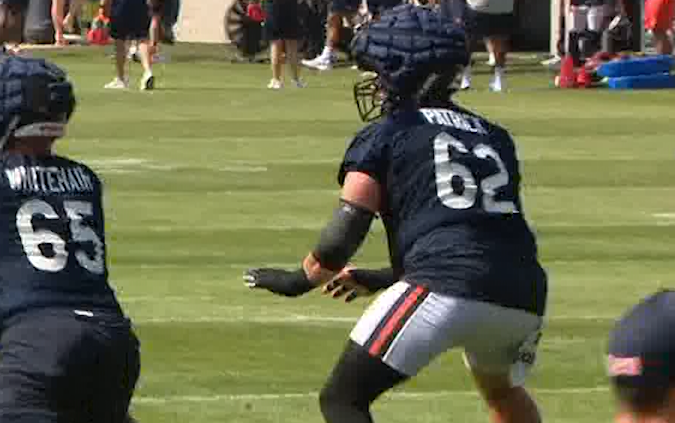 LAKE FOREST – One of the questions that appeared to have an answer in a Bears’ offensive line in flux was the center position, where a newly signed player is set to fill it for 2022.

But that plan has been sidetracked thanks to an early training camp injury that has sidelined Lucas Patrick.

Per head coach Matt Eberflus, the center suffered a right hand injury on Thursday and doesn’t have a timetable for a return. When asked for specifics, he would only reveal that Patrick will be out “a little bit of time.”

Per multiple reports, the first from Brad Biggs of the Chicago Tribune, Patrick will have surgery on his right hand with the goal to have him return before the season opener on September 11th against the 49ers at Soldier Field.

Along with that injury to the center, Eberflus said that offensive tackle Teven Jenkins is “working through something” and is day-to-day. He wouldn’t confirm whether it was an injury or illness that has kept him out of the last two days of workouts.

It’s not something that Eberflus or offensive coordinator Luke Getsy wanted to see as they try to find a combination that works on the line for the 2022 season. Patrick, who signed with the Bears this past offseason, was expected to bring stability in the middle while Jenkins figures to compete for one of the tackle spots.

For the moment, the Bears have Sam Mustipher, who started at center for all 17 games in 2021, along with rookie Doug Kramer filling in for Patrick as training camp continues. His loss along with Jenkins doesn’t help an offensive line trying to figure itself out, but Eberflus is curious how the unit will respond to the early injuries.

“A lot of things you can’t change in life, right? You get in these situations, and there they are, they present themselves, and how your respond to that situation is all that matters,” said Eberflus. “You can’t take a magic pill, you can’t just invent another player that’s gonna show up sometimes, you just have what you have, and you have to work through it and make it the best you can.

“That’s what we’re doing right now, we’re trying to find the best combination. That’s really for all of training camp. So we have a piece that’s out right now, now we’re going to plug in and play, and we’ll find out the best group we’ve got.”

It’s a task that was going to take time before these players were out, and now that becomes more of a challenge for a new coaching staff early in training camp.

Someone in Illinois bought winning $1.28B Mega Millions ticket