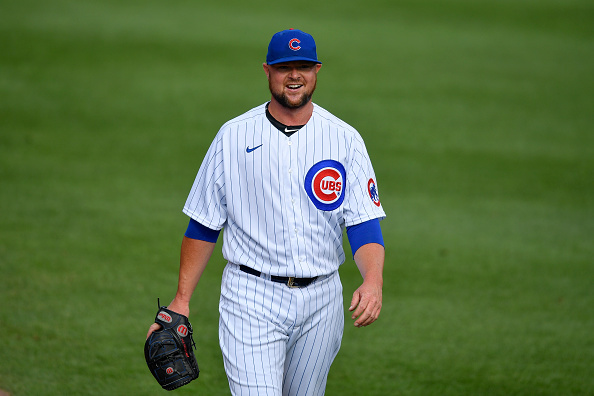 CHICAGO – In many ways, it was just like old times at the Friendly Confines, but in others, it wasn’t.

The sun was shining and the park was pretty full on a warm August afternoon at Wrigley Field with the Cubs facing the rival Brewers for a Sunday matinee. Jon Lester was at the ballpark, and when he appeared on the video board in left field, a loud roar of applause came from the rooters for the home team.

That happened a lot for the left-handed starter when he was in Chicago during one of the great eras in Cubs’ baseball from 2015-2020.

Just one major thing was quite different for the longtime Major League Baseball pitcher, and it was fairly obvious: Instead of being on the mound, he was sitting in the stands, with family members on each side of him.

Jon Lester, the baseball spectator, is still something new.

“It was a cool moment. A little unexpected,” said Lester when he got a big ovation from the crowd on August 21st. “It caught me off guard a little bit and it was awesome to see. Obviously, Chicago and the fans are special to us and to me.

“It was just cool to be back and see the guys, and obviously the reception put the icing on the cake.”

Trips to the ballpark are for leisure now for Lester after he announced his retirement back in January after a 16-year career that included a memorable time in Chicago. He was a two-time All-Star, National League Cy Young Award finalist, co-NLCS MVP in 2016, and then helped the Cubs to their first World Series title in 108 years in November of that year.

Those are in the rearview mirror for Lester now as he looks ahead to retired life that includes plenty of family time, which was a little difficult in the grind of an MLB season.

“My boys are in football now, I’ve got a little girl that’s just about to start ballet and tennis,” said Lester. “We’re full bore in it as far as our schedules.”

That’s kept him from reflecting a lot on his career and the sport that consumed most of the 38-year-old’s life before 2022. It’s the daily grind, however, that Lester admitted that he’s not happy to deal with anymore, even if there are other aspects that are the opposite.

“Obviously, I miss the pitching and that competitive side of it,” said Lester. “From spring training to the end and hopefully playoffs, you’re putting your body through a lot. It got hard towards the end. I don’t miss that aspect of it.

“I miss the camaraderie, I miss the guys, I miss trying to win and get to the playoffs and all that stuff. But the grind of the game I definitely don’t miss.”

Sport isn’t completely gone for Lester, however, as he has continued to play golf both for leisure and competition. It’s something that began when he was a kid, playing with his grandfather and father, with his interest peaking around the time that Tiger Woods emerged in the sport.

Lester has appeared in other tournaments over the past five years and has now partnered with Northbrook-based Swag Golf late this summer. The company has recently opened a store in Gallagher Way next to Wrigley Field.

All of this offers Lester a competitive outlet after his the conclusion of his successful playing career.

“Going to those tournaments and getting to compete, which I know going to them I’m probably not going to win them, so it’s just more-or-less hanging out,” said Lester. “I get to see guys that I played with and played against and, same thing, you get to meet new people in different sports and entertainment and get to see how they play and all that stuff.

You can watch more of Lester’s interview with WGN News Now’s Larry Hawley in the video above.