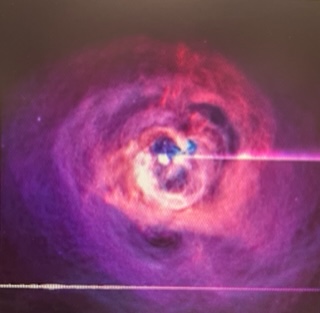 When you think of a black hole, most people think of a giant scary mass of energy that sucks the life out of the universe! (think movies like Event Horizon, Interstellar, Star Trek!)

Well, this week NASA’s exoplanets Twitter account released an audio clip of what a black hole some 240 million light years away sounds like, and let’s just say adjectives like eerie, creepy, and chilling really don’t do it justice because it literally sounds like you can hear the souls of stars and planets being sucked out of the universe!

NASA released the audio to clear up the misconception that there is no sound in space because it’s a vacuum and there’s no way for sound waves to travel.

The agency said it picked up the sound from a galaxy cluster that had a lot of gas.

The actual sound is actually too low for humans to hear, so if you were close to the black hole, you wouldn’t actually hear it.

NASA amplified the sound and mixed it with other black other data so we could hear it.

Still, now we know. And we’ve heard it and can’t unhear it.

Take a listen above – if you dare.