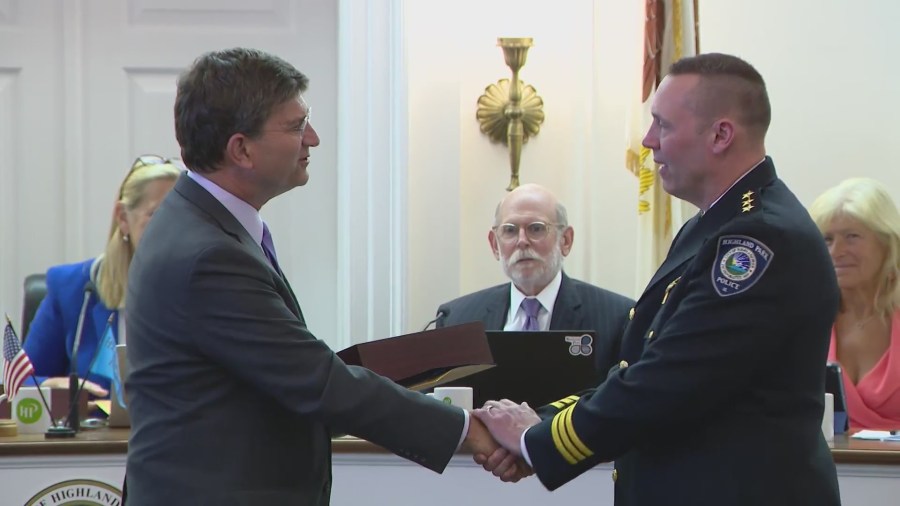 HIGHLAND PARK, Ill. — First responders in Highland Park were honored Monday night for their response to the tragic parade shooting on July 4, with those in attendance offering a standing ovation for the emergency personnel who helped save lives and those who led them during a time of crisis.

“I’m accepting this flag on behalf of all my officers. There’s no question that they performed heroically, professionally and certainly. I try to tell them every day as we’re working through this, I remind them just how proud of them I am,” Jogman said.

The flag was a reminder of why the Highland Park community gathered on Independence Day.

“When I heard the shots like most people, I thought this can’t be true and I see people running towards us say shots fired,” Idleburg said.

Like many first responders, Sheriff Idleburg ran toward those shots and helped a woman who’d been injured as they waited for paramedics to take her to the hospital.

“She’s doing much better I have had the opportunity to sit down and talk with her and I did give her a hug and she gave me a hug,” Idleburg said.

It’s those stories that bring comfort amid the deep sorrow.

“There are people today that are here with us because of all the work that was done that day,” Idleburg said. “You know, I think we’re all carrying it still and wish we could have done more for sure.”

“While there are moments of normalcy, we know that our hometown lives in the shadow of this tragedy,” Mayor Rotering added.

But even in the shadow, Highland Park is making time for thanks and gratitude.

“It’s a day that we will never forget for the pain and the grief of those who were murdered but we also need to think and remember the heroism and the honor of the people who serve us,” said Rep. Brad Schneider. “I thought it was important to make sure that we recognize them today and that we continue to recognize them in the days and months and years ahead.”

Hinsdale girl is model for the newest ‘American Girl’ doll