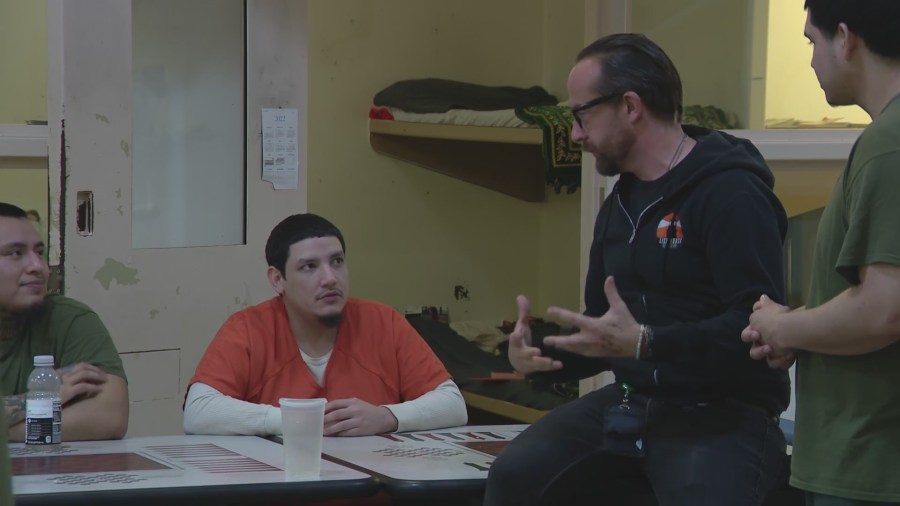 CHICAGO — Two years and five months after Robert Merriweather was sent to prison on heroin charges he found himself alone, in a wheelchair and with few options at Chicago’s Union Station.

“Figure it out,” was the response Merriweather said his prison case worker wrote to him a few days earlier in response to a request he made for more help than a one-way train ticket to Chicago from the prison in far southern Illinois. Prison staff had made arrangements for Merriweather to stay at a shelter 40 miles away in Aurora. It turns out it was a shelter that couldn’t accommodate people who need to use a wheelchair.

Thirty-eight percent of people released from the Illinois Department of Corrections will return to prison within three years, according to the most recent state data available. It’s how those people are treated while they’re incarcerated that may determine their likelihood to return, according to Kane County Sheriff Ron Hain. His jail, in Chicago’s far western suburbs, offers intensive drug treatment and job skills programming that Hain says has dramatically lowered the rate of recidivism in Kane County.

Merriweather, now 64, was transferred from the Kane County jail to state prison in March of 2020, just as the pandemic was taking hold of the nation. He spent the next four months at an intake facility because other facilities had stopped accepting inmate transfers to slow the spread of the virus. As weeks turned to months, Merriweather and other inmates spent most of every day in their cells without access to recreation, drug treatment, or other programming. He said he developed severe rheumatoid arthritis from all his time sitting idle. When he was transferred to Pinckneyville Correctional Center in August 2020, Merriweather said pandemic-era drug treatment and education programs consisted of packets of worksheets distributed to inmates.

“They’re warehousing us,” Merriweather said. “You can’t do nothing but get depressed.”

State prison officials defend their decision to suspend in-person classes during the height of the pandemic as a necessary step to keep inmates and staff safe. They say in-person programming has resumed at all facilities where there is not a Covid outbreak. However, it’s the quality of those programs and the preparation for life on the outside that has some questioning the effectiveness of IDOC’s efforts at rehabilitation. The 38% IDOC recidivism rate is actually a slight improvement over previous years.

“Mr. Merriweather’s case is not unique,” said Nate Lanthrum of Lighthouse Recovery. His organization partners with the Kane County jail to provide inmates treatment and life skills. “To be left with a one-way train ticket and an IDOC counselor saying ‘figure it out?’  These are the conditions people are returning to our community, with no support and no help,” Lanthrum said.

Sheriff Hain said he pitched IDOC on a pilot program in which state prison inmates from Kane County would transfer back to his jail six months before their release so he can provide a smoother re-entry into society.  Hain said after two years of pitching the program, state prison officials abruptly declined without offering an explanation.

As for Rob Merriweather, when he found himself in his wheelchair outside of an Aurora shelter that couldn’t house him he made one phone call.  It was to Nate Lanthrum at Lighthouse Recovery. He and Sheriff Hain quickly found a motel room for Merriweather and eventually space in a shelter. But Lanthrum notes it could’ve easily gone the other way. “We’re talking within days we’ve seen people come out and immediately go back because they’re without services.”

Merriweather hopes he has seen the last of prison.

“If you have programs it will give a man some hope,” Merriweather said. “He will come out and do the opposite of what he was doing to get himself there.”