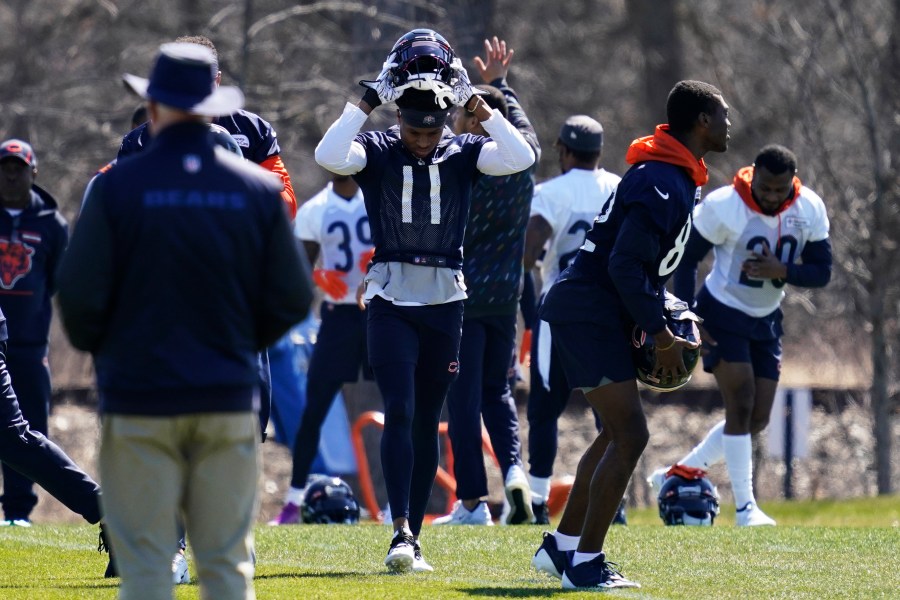 LAKE FOREST – He may only be in his third season in the National Football League, but in this group of wide receivers that have been assembled for the 2022 season, it’s easy to call him a leader.

He established himself last season as the go-to target for Justin Fields, and with Allen Robinson moving on at season’s end, Darnell Mooney is the pass catcher the group is looking to for production.

It’s a role that the former sixth round pick has embraced in training camp with a new coaching staff, including offensive coordinator Luke Getsy. Mooney says he’ll go out of his way to provide help

“I’m going to take another, not risk, but task to help everybody out,” said Mooney at his news conference at Halas Hall on Thursday. “I know I can just do everything on my own. I have to be able to have help around the field. I need guys that I can trust, Justin can trust, and they can help out in the offense as a whole.

“If everybody’s working, working, we can’t do anything but get better.”

It’s certainly a new group when you look at the roster, full of players who are looking to prove themselves with a new team. N’Keal Harry, David Moore, Dante Pettis, Byron Pring, and Equanimeous St. Brown are some of those who were brought in with a few years experience.

Third round draft pick Velus Jones Jr. could also make his impact on the receiving corps along with special teams.

Mooney is the only player who had major production with the Bears last season as he led the team with 81 catchers, 1,055 yards and four touchdowns. It’s the first time he’ll enter an NFL season as the Bears’ designated No. 1 receiver, and it’s something that Mooney’s prepared for.

“My mindset has always stayed the same,” said Mooney when asked how he handles being the team’s top receiver. “Even from college, I always wanted to be the hardest working guy and continue to be great and do the best thing I can do to my ability. I always wanted to train and be a player as if a walk-on was going to college. I always wanted to work as like that.

Ketanji Brown Jackson gets a bobblehead