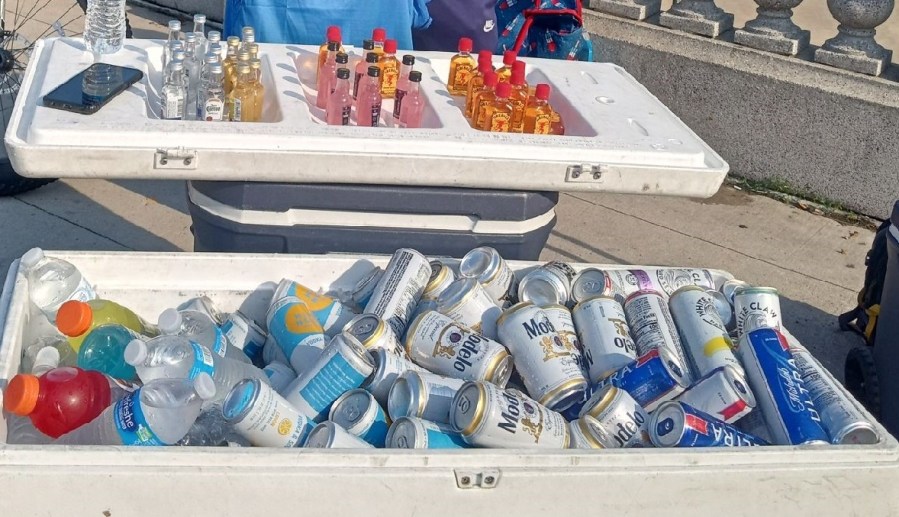 CHICAGO — Vendors have been selling much more than just peanuts and Cracker Jack outside Guaranteed Rate Field.

Their offerings also include beer, liquor, seltzer and other alcoholic beverages. But now cops are cracking down.

“It’s like we got out of hand with liquor selling,” admitted one vendor who set-up shop on a folding card table on the Dan Ryan Expressway overpass next to Guaranteed rate Field.

On a recent afternoon, one hour before a White Sox game, SkyCam 9 spotted vendors with makeshift bars on the bridge. Most had their alcoholic offerings in plain sight, arrayed in neat rows with dozens of small bottles for sale along with cold beer on ice. One woman was bold enough to hang a sign offering her menu of options.

Alcohol can mean big bucks for the vendors. One vendor said he can double his money on days he sells beer and liquor in addition to water and peanuts.

Then on Aug. 14, when the White Sox played the Detroit Tigers, a fight broke out between a few of the vendors on the overpass that led to a crackdown by cops, according to witnesses and vendors.

Chicago police confirm they were dispatched to a battery in progress, but the participants were gone by the time officers arrived. A day later when the Houston Astros rolled into town, police officers could be seen checking for peddler’s licenses and the vendors went back to hiding the alcohol under ice and out of sight.

“It was good while it lasted,” said a man who has a city peddler’s license that authorizes him to sell water, peanuts and souvenirs, but not alcohol.

Another vendor was angry about the crackdown.  “Cops are out here harassing people for not having a peddler’s license and there’s violence going on around the city … kids are getting killed,” the man said after police ushered him off the overpass.

Vendors say they’re accustomed to the ebb and flow of extra attention from law enforcement.

“They got their jobs to do for a bit … we’ll bear with them,” said one vendor, but when prompted about whether he would return to selling alcohol, the extra attention from law enforcement didn’t seem to deter him.

“For sure!” he said, before returning to pushing peanuts to White Sox fans as they left the Sox-35th Red Line stop.

The price of premium beef is going down, here’s why

You can help name planets observed by the James Webb Telescope: Here’s how