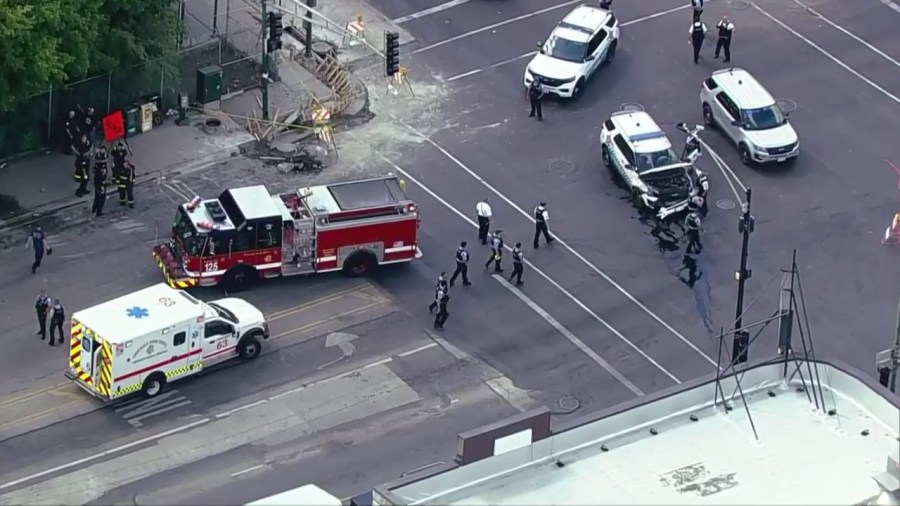 CHICAGO — Two pedestrians and one Chicago Police officer were transported to area hospitals following a collision on the Northwest Side.

The crash happened just after 11:35 a.m. at Fullerton and Central.

14th district CPD commander, and Acting Deputy Chief for Area 5, Elizabeth Collazo stated just minutes before the crash, Area 5 detectives in an unmarked police vehicle had attempted to pull the offending vehicle over. The suspects had at first stopped, but then fled from the unmarked vehicle. They then struck the marked squad car which was responding to an unrelated matter.

After striking the squad car, Collazo said the offending vehicle then veered toward a bus stop where pedestrians were gathered. An 81-year-old man and an 83-year-old female were injured, though Collazo did not know if they were struck by the vehicle or injured while trying to flee.

Officers on scene provided medical attention until paramedics arrived. Both were transported to an area hospital and are in stable condition.

Police arrested the driver of the offending vehicle as well as a female passenger. A firearm was also recovered from their car. Police said the offenders declined medical attention. Collazo made note that officers involved did have their body cameras activated.

The officer in the marked vehicle was also transported to an area hospital and is also in stable condition.