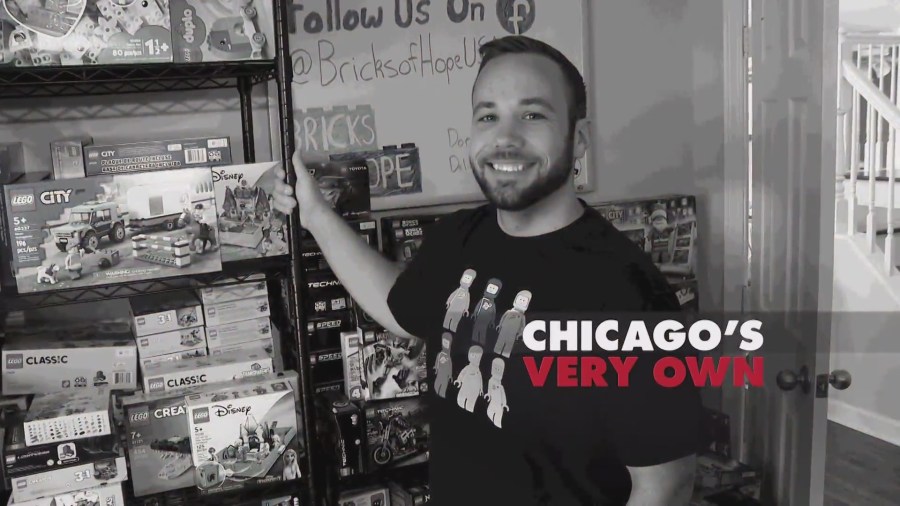 CHICAGO — As a child, Adam Petraglia’s favorite toys were LEGO sets. When he was diagnosed with a life-threatening illness at age 11, he says the building blocks became a means of escape and coping.  Today, he is cancer free and helping other hospitalized children tap into their imagination with the very same toys.

Petraglia delivers LEGOS to kids to children’s wards in hospitals because he understands how important it is for a sick child to have a creative outlet.

The 32-year-old learned he had leukemia on his 11th birthday.

“It was kind of that moment that flipped life upside down for an 11-year-old being thrust into a hospital room for next six months,” he said.

The plastic bricks in many ways, helped him get through his hospital stay. Creating and building LEGOs brought him a sense of normalcy.

“It is totally an escape from where you are and it lets you zone into that,” he said.

Petraglia is now cancer free and now focuses his purpose and passion to giving back. He created Bricks of Hope a non-profit that collects and donates LEGO sets for hospitalized children.

He has donated more than 1,000 LEGO sets to Chicago area hospitals, including Advocate Lutheran General hospital, where he spent months fighting cancer.  Child life specialist Katie Steinberg says the hospital is thrilled for the donation.

“I would say it’s really inspirational, he’s already inspired a lot of our patients who have received some of his LEGO sets that have turned around and donated back again,” she said.

Petraglia says the LEGO sets are so popular, some hospitals go through more than 100 sets a month.

For safety reasons, Petraglia doesn’t always have the opportunity to meet the children, but he treasures the moments when it happens.

“We did meet a young patient who came out to accept the donation from us, I’ve got to say, it is probably one of the best feelings that I’ve had during this whole experience,” he said.

Helping the children during recovery is personal for him.

“I feel like I survived for a reason and this is part of that reason of why I am here today,” he said.

Adam Petraglia is one of Chicago’s Very Own. If you would like to donate a LEGO set to Bricks of Hope, visit their website.