–A second straight day of 100% possible sun and of 70+-deg high temps. Frank Wachowski tells us the opening four days of the month, having received 87% of their possible sun makes this the sunniest start of a October in the 11 years since 2011. (Frank notes that October went on to produce 100% of its possible sun for eight consecutive days establishing a new record for October).

—Looks like we have the 70s as highs on tap Wednesday and Thursday making this the longest string of consecutive 70-deg days in 11 days. What a nice way to start the new month. It’s perfect for our farmers in the midst of the fall harvest.

—Some high clouds arrive as the night proceeds. That is likely to check (to come extent) the steep temp drop we experienced last night which saw temps drop to 45 at O’Hare and 47 at Midway—but as low as 34 Tuesday morning at Woodstock and Sugar Grove.

—BIG CHANGES LOOM later this week. We are headed toward a gusty cold frontal passage as an expansive Canadian high pressure–with a central barometric pressure of 1041 mb (30.74″) as it crosses Lake Winnipeg in south-central Canada on its way south into the U.S.—takes over dominance of the Chicago weather scene late Thursday and through much of the coming weekend.

–The first frost of the season threatens inland areas Friday and Saturday night–which is close to on schedule for those areas. October 10-12 is the average first date of frost in many of those areas–but Oct 24th is the mean first 32-deg date at Midway underscoring how much later in the season freezing temps have occurred in the city.

–That makes the incoming air mass the chilliest of Fall 2022 and the coolest outbreak to arrive in Chicago in the 5 months since last May.

–Temps rebound in the early and middle part of next week—but another healthy cool surge hits again later next week.

–While spotty showers may occur with the transition to windy, much cooler weather later this week, modeling suggests precip tallies will be quite modest continuing the drier than normal trend we’ve seen in Chicago. Mark Carroll, my WGN meteorological colleague, adds we to join only 7 of the past 151 years in recoding NO RAIN in the Sept 26 through Oct. 4th period.

TONIGHT: Becoming partly cloudy, not quite as cool with near seasonable temps. Low 51 in the city; low to mid 40s inland.

WEDNESDAY: Partly sunny and mild but more clouds later in the day. High 75–a reading 7-deg above normal.

WEDNESDAY NIGHT: A good deal of cloudiness, mild for the season. Chance of a few sprinkles or a brief shower or two. Low 54.

THURSDAY: Cloudy spells. Initially mild–but turning windy and cooler in the afternoon. A few brief showers are possible and the chance of isolated thunder in a spot or two. Any rain impacting 30% of the area by nightfall. High 71–but falling into the 50s later in the day as winds shift northerly. Wind gusts may build to near 40 mph at times late Thursday and Thursday night.

FRIDAY: Windy and noticeably cooler. The season’s coolest daytime temps yet. Cloudy spells but with some mixed sun. Lake effect rain showers are possible in northwest Indiana and near the Illinois Lake Michigan shoreline. High 55.

SATURDAY and SUNDAY: Generous sunshine, only a scattering of clouds, cool. High Saturday 56. Sunday’s high 53. CHICAGO MARATHON WEATHER AS THE RACE BEGINS SUNDAY: Temps in the low to mid-40s and winds SW to WNW 7 to 16 mph. 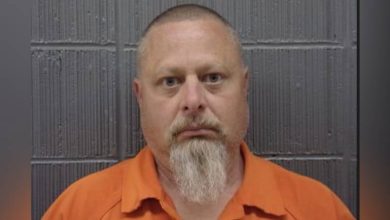 Clerical error may have led police to overlook Richard Allen 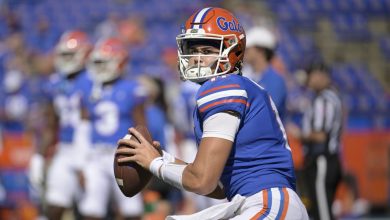 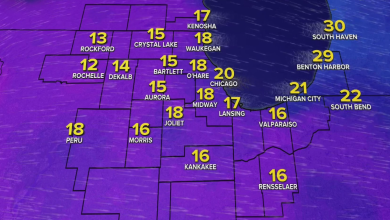