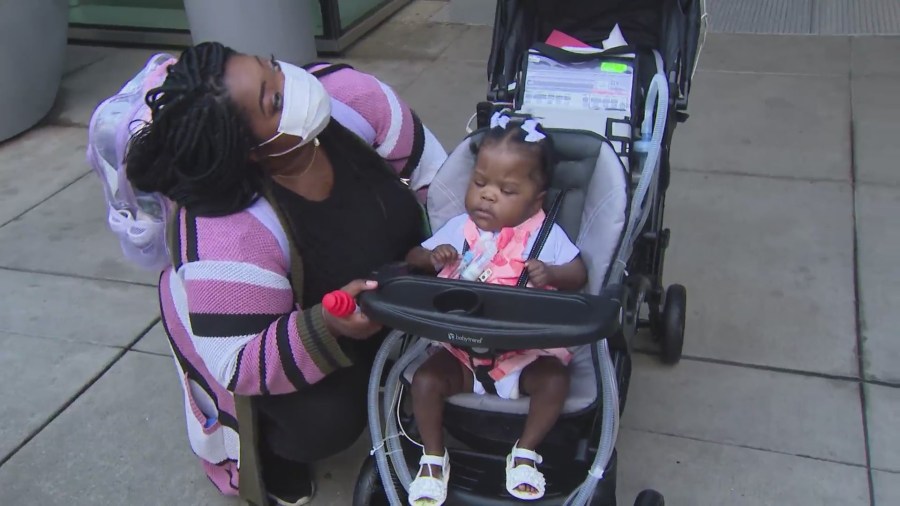 After a late winter 2021 arrival, baby Autumn is finally home.

Born weighing one pound at 23 weeks gestation, baby Autumn has spent more than 500 days in the hospital. On departure day, supplies were packed and instructions given as the sleepy toddler waited patiently in her intensive care unit room for a meeting with Dr. Megan Lagoski, a neonatologist at Lurie Children’s Hospital.

“She’s going home with a ventilator, so a breathing machine, and she has a tube in her neck called a tracheostomy to help her breathe at home,” Lagoski said. “Then, she’ll get feedings thru a G-tube, so something that goes into her stomach, so she is very technology dependent.”

“If she comes out lifeless, then pass me my baby and I’ll hold her,” Robinson said of doctor’s concerns. “If she comes out fighting, then we’re going to fight. She came out feisty and they nicknamed her ‘Feisty.’ From then on, she’s just a fighter.”

Weighing 1.1 pounds, the micro-preemie was given a 50/50 chance of survival. Autumn had severely underdeveloped lungs causing a chronic condition known as bronchopulmonary dysplasia. Baby Autumn was ultimately transferred to Lurie Children’s Hospital for more specialized care.

“She came to us because she was having more and more trouble with her breathing, despite the max amount of support she could get on the ventilator,” Lagoski said.

Autumn’s mother says the toddler loves to cuddle, smile, play and adores the attention she received from nurses and doctors. Much like the physical and emotional support the medical staff offered Autumn, Robinson, too, was a beneficiary.

“Me sitting up in here, by myself, for most days, they are my family,” Robinson said. “Me, sitting here, and I have nobody to talk to or vent to; that’s who is here for these families. I’m going to miss this place terribly.”

Yet, for Autumn’s mother, a feeling of optimism.

After 524 days hospitalized, now 17-month-old Autumn got her first glimpse of summer on her way home.

“So, I’m very scared, but I’m also ready,” Robinson said. “I’ve been preparing for this since she was born.”

A specially trained team cared for Autumn as Lurie Children’s is home to the only bronchopulmonary dysplasia program in Illinois.